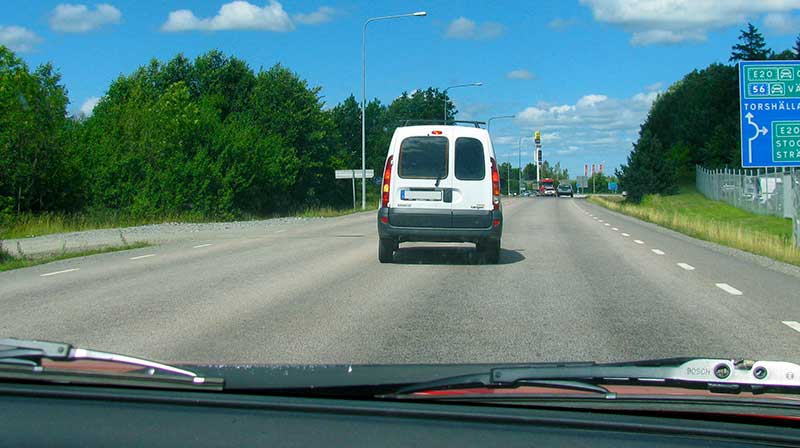 The white car is turning into the road on the left. In this case, you are permitted to pass on the right.

There are three fundamental rules for overtaking:

You are not allowed to overtake, since you will have to cross the centre line when the visibility is limited. 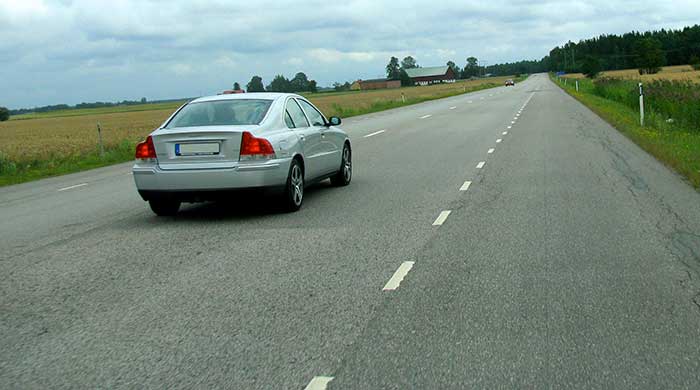 In this situation, it is appropriate to drive on the hard shoulder to assist the silver car overtaking you.

The time gained from an overtaking is often minimal. This makes many overtakes unnecessary in relation to the risks. The time gain per 10 km can generally be said to be:

Important clarification on the calculation of time gained

Do I have to be able to do calculations like the one below on the actual theory test?
– Most likely not. The difference between the alternative answers is often great enough for you to make an estimation like the one above, i.e. that you will gain 1 minute/10 km at speeds under 90 km/h and 30 seconds/10 km at speeds over 90 km/h.

We first calculate how many minutes it takes to travel 1 km at both speeds:

It therefore takes slightly less time with the higher speed. The difference is:

Now it is done. It is however easier to understand if the answer is recalculated to seconds:

Formula for calculation of time:

For the formula to work requires us to use metres instead of 10 km and metres per second (m/s) instead of kilometres an hour (km/h). The speeds are therefore recalculated to m/s:

Only now can we use the formula Distance / speed = time:

We can then work out the time difference between both speeds: