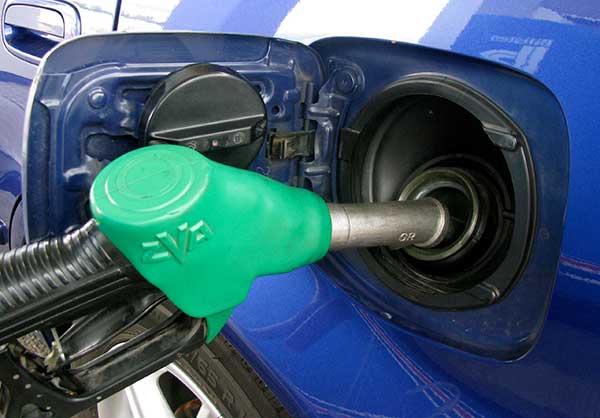 Filling up a petrol-driven car.

A diesel car with a particle filter and a high environmental classification emits a significantly smaller amount of harmful particles.

Electric cars are becoming increasingly common. They do not release any harmful substances and electricity is also cheaper than petrol.

The downside of electric cars today is partly the price, and partly that they have a shorter range than the corresponding model of petrol car. Another factor is that the electric car is only as clean as its energy source. If the electricity is produced by hydro power, it is clean. If it comes from coal, however, then it is not good for the environment.

The battery of the electric car contains large amounts of rare-earth metals extracted from mines. Mines create pollution, and the working conditions are sometimes bad.

Ethanol is a type of alcohol that is extracted from plants such as wheat and sugar cane (renewable sources). The shift from petrol to ethanol is relatively minor (similar technology is used).

Ethanol is better for the environment than the fossil fuels, but there are a few problems. The process of manufacturing ethanol is not environmentally friendly and when it is made with wheat, it means that crops which could be used for food are used as fuel instead. Another downside is that the fuel cost is often the same as for petrol.

The type of gas most commonly used for vehicles is CNG, which is made either of fossil or organic fuel. How environmentally friendly the gas is depends on its source.

Hybrid cars have two different energy systems. This is often both environmentally friendly and practical. If, for example, the hybrid car has an electrical engine and a petrol engine, the electric engine can be used for shorter distances in built-up areas. When a longer range and more power is required, the petrol engine takes over.

All new cars that are sold within the EU have to fulfil certain environmental requirements. The requirements in Euro 5 are more lenient than those of Euro 6, for example.

Municipalities can declare different environmental zones where only certain types of vehicles are allowed.