You are in the queue of cars. Are you permitted to overtake?

In popular speech, the solid line is often described as a “prohibition on overtaking”. In actuality, the law does not say anything about overtaking being prohibited; solid lines are used when it is “not permitted to enter the opposite running lane” (Traffic Sign Ordinance).

We assume that the queue is standing still. If the road was wider and you were going to turn left a bit further on, you have the right to overtake the cars and then turn off, provided that you do not cross the centre line when you pass the stationary cars.

But don’t two of the options mean the same thing?
– No, they may be perceived as the same, but there are differences.

Example: You are driving behind a tractor on a country road with a solid line. The tractor drives out on the hard shoulder and you think “I can easily and safely drive past without even crossing the centre line, but I cannot overtake since the line is solid.” You therefore stay behind the tractor and cause a long queue (and maybe obstruct an ambulance). The right choice is to overtake the tractor without crossing the solid line. (If it is not possible to overtake the tractor without crossing the centre line, you have to stay behind it.) This example is given to show that there are situations when it is important to differentiate concepts.

Körkortonline.se offers driving licence theory tests in English (also in Arabic). This is an example of an explanation of a test question. 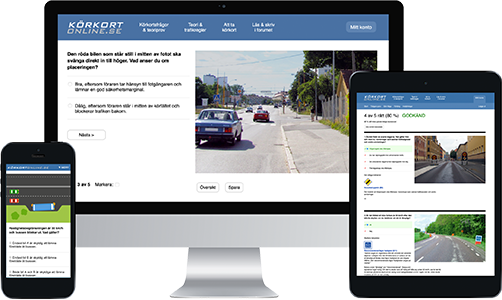